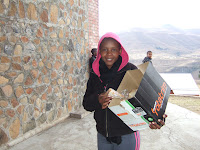 Anna, one of the other Welsh teachers in Lesotho, is working at St James High school, just outside Mokhotlong. Her students have worked hard this year, so as a reward, she threw them a party this Saturday. Most of the students stay at school in the term time, either in the boarding house on site or the village nearby, so nearly everyone came along. Some enterprising students even came with sandwiches and snacks to sell.

Anna began the party with prizes for competitions she’d run, and showed some photos of the students at work and play in the school. Then it was time to for the DJ to start the music and the dancing. 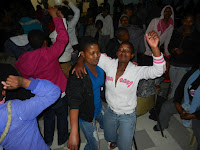 Just like any other school disco, lots of people were a little shy at first, but once the tunes got a bit more lively, they stepped up to the dance floor and joined in the party. Everyone had a good time and said they’d like a school party every quarter!
Posted by Claire Bradford