Even though we’re thousands of miles from Wales, we still celebrated St David’s Day at St. Peter’s. Although ours had a twist – it was a Lesotho Wales Cultural day, with all the things you might expect on St. David’s Day and more. 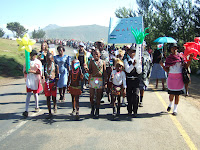 After a lot of hard work preparing, all the school children met at 8:00am at a football ground near school. From there, we marched all the way through town – all 680 of us! Half of us were dressed in Basotho costume and the other half in Welsh costume. After we had let everyone in Mokhotlong know it was St. David’s Day, we went to school where the real celebration began. 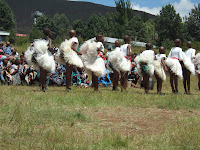 Classes Reception to 3 started our event with races, football and netball. Then Class 7 sang the Welsh national anthem beautifully. After that, we had many dances, songs and short speeches, some Welsh and some Basotho. Everyone had a wonderful time and we even got a mention on Radio Lesotho!