Looking After the Environment

Friday was Moshoeshoe Day, a national holiday to celebrate the life of the first king of Lesotho, Moshoeshoe 1. He was the man who brought different tribes together in the 1800s to form the nation of Lesotho. 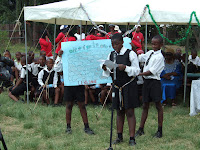 At school, most children and teachers were given the day off, but some chose to come into school for an environment day. You have probably been learning about climate change at school: it’s the same here. Some of the causes and effects of climate change are different here to those in the UK – you would be more likely to ride in a car or go on holiday on a plane, but also more likely to recycle. People in Lesotho reuse some rubbish, but don’t recycle anything. Most rubbish gets burnt or dumped. The children in Hoohlo primary are learning about how climate change is caused and how it has affected their country. 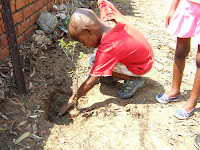 So last Friday, some of the children at school asked members of the local community in to talk to them about why it is important to look after the environment. We were joined by children and staff from 2 other schools in Maseru. The children led a march through the local village of Ha Hoohlo, singing and picking up litter. They showed people how they could help the environment by planting trees and making fire bricks to cook with from old paper, rather than burning leftover pieces of cloth from the factories.
Posted by Claire Bradford