On Wednesday we had the day off school for Africa and Heroes’ Day. These are 2 different celebrations that used to be held on different days, but were combined a few years ago.
Africa Day is a day to celebrate the Organisation of African Unity, which is now called the African Union. It is a special day all over Africa. 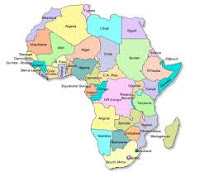 In the 1800s, most African countries were colonies – ruled by other countries. These other countries were Britain, France, Portugal, Spain, Holland and Germany. In the 1950s and 1960s, most of these colonies gained their independence and could rule themselves. The Organisation of African Unity was created in 1963 to help the free African countries work together.
Heroes’ Day is special to Lesotho and very much like our Remembrance Day. The Basotho remember the heroes of their nation, like Moshoeshoe I, who created the country.
People remember the soldiers and civilians who have fought in wars, like the 1500 Basotho who fought in World War I and the 20,000 who fought in World War II. There is a memorial to these soldiers in Maseru, and the king of Lesotho goes there to pay his respects on Heroes’ Day, just like the queen of England does at the cenotaph on Remembrance Day.
Posted by Claire Bradford